That Wanaka tree is located in Lake Wanaka. It is a lone tree growing in the lake. At certain times of the year it is out of the water and other times when the lake is high it is deep in water.

It is thought to be the most photographed tree in New Zealand. 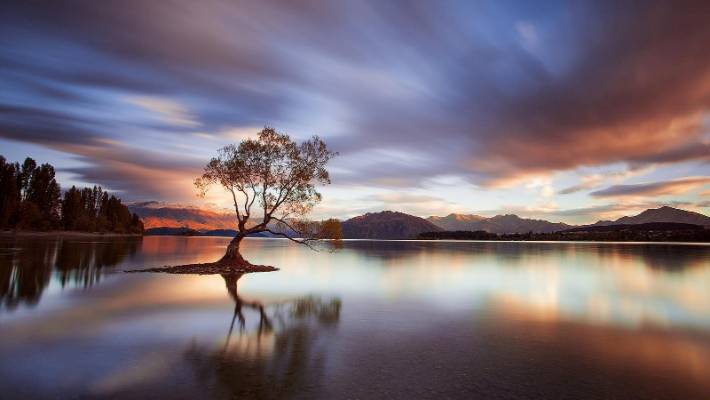 In around 2011 it was posted on Social media as a joke and it just got more and more popular. Now people come from everywhere to photograph it.

I have included part of an interesting article by Marjorie Cook about the Wanaka Tree.

The tree started life as a fence post at least 77 years ago.

Wanaka artist and writer Gwenda Rowlands, 85, is a keeper of local history and remembers the fence line from 1939, when she first visited it in a little dinghy her father built for her and her older brother.

She has watched it evolve from a "hacked off branch from nearby willows" to a symbol of determination.

"It was 1939 I remember it growing there and that is not yesterday. So it has been growing slowly all that time . . . It was just big enough to lift the wire up with a bit of tension on it. I can remember a gap where the tree is now, on the beach, and the sheep could just wander off into the town shopping if they wanted."

Rowlands agrees the tree "seems to be getting a bit of an overload" but has not let that overwhelm her enjoyment of the site's natural history.

"They looked as if their marriage was going to work, that they would be happy ever after, and that is what you want for them."

Rowlands suggests Otago artist Brian Halliday (1936-1974) made one of the earliest images of the tree while it was still a post.

​A copy of Halliday's painting graces the cover of Wanaka and Surrounding Districts: A Sequel to Wanaka Story, by Irvine Roxburgh (1990).

Rowlands likes to think the tree could the very last, very tiny strainer shown in Halliday's painting but accepts the artwork is representative.

So what does she make of the famous tree?

"It shows anything that is alive has a determination to live," she said.